There’s beauty in everything.

At least, that’s what Syracuse defensive end Kendall Coleman will tell you.

On the surface, most people would probably wonder how or why a football player would get into poetry. But when you really think about it, the nature of the art form can make you wonder why more football players aren’t into it.

Writing, reading and listening to poetry can be incredibly reflective. It takes the mind to a place that is very relaxed and aware. It creates a heightened sense of normal, everyday things. It brings appreciation to the details.

For Coleman, intaking and expressing those truths in the form of poetry is hereditary — even if he didn’t know that when he first discovered his passion for it.

“My mom was writing poems when she was my age, and I didn’t know this at the time,” Coleman told TDN. “I had a [high] school assignment and we had to do some sort of art for the school assignment. You could either turn in a piece of home-created art or you could write a 15-page paper.”

A 15-page paper? If you asked me to do a 15-page essay near the end of my high school career, I’d probably try to find an easy way out of it.

Turns out Coleman did too.

“I was stressing out,” Coleman said with a laugh. “I was like, ‘I’m a senior in high school, I’m almost out of here and now you tell me I have to do this 15-page paper?’

“So we were getting closer to the due date and I thought, ‘You know what, poetry is art, so let me see if I can scrap something up real quick. I put it together. I thought it was alright. I turned it in and they were like, ‘Wow, you wrote this?'”

What started out as a loophole for an assignment turned into a way to tap into a passion he never knew he had, and a way to push himself outside his comfort zone — an exercise that certainly carries good practices in other areas of his life too.

“After I wrote [the first one], I wanted to see what else I could do with poetry,” Coleman said. “So, in my free time I started writing a little bit here, writing a little bit there and they told me that when I went off to Syracuse that they wanted me to continue that, see if I could broaden my horizons, get better at it and maybe get on stage with it.”

For Coleman, poetry is art. The way he sees it, poetry yields the same sort of inspiration as a more common medium.

“I feel like poetry and music are very similar,” Coleman said. “One of my favorite artists, J. Cole, I feel, is a poet in the way he presents his music.”

Coleman decided that he wasn’t going to “go out on top” after the first poem he wrote got him a passing grade and a scholarship to play football at Syracuse. When he arrived on campus, one of the ways Coleman spent his free time off the field was by continuing to write. After a while, he felt the confidence to get up on stage and read some of his own work.

“I got on the stage my freshman year at Syracuse,” Coleman said. “It was a little nerve-racking, but I’m glad I did it. I got some good remarks afterward. … I got a nice compliment after I got off the stage. He told me he ‘felt a J. Cole vibe from your poems where you were up there.’ That felt really cool.”

Coleman explained that poetry isn’t something that you have to spend months or years learning about before you do it. Instead, he said the best way to do it is to just start.

As for what he writes about, the answer is simple yet vast: everything.

“I just write about life,” he said. “I feel like there’s art and beauty in everything. I remember one day I was leaving campus, it had been a long day, the sun had started to set on the back of the campus, I was just walking to the bus and I looked up [saw the sky] and told myself, ‘I’d be an idiot to not write about this later.’ Anything that catches my attention. There’s art all around us.”

The 6-foot-2, 255-pound pass rusher was a four-year starter with the Orange. In 2018, he finished the season with 12.5 tackles for loss and 10 sacks. The following year he made it back-to-back double-digit tackles for loss to cap off a strong, productive college career.

Pass rushing is often called “poetry in motion” by those who know it best. There are so many moving parts, but when it all comes together, it flows. As someone who has plenty of experience in both pass rushing and poetry, Coleman said it’s not just a cool phrase; there definitely are similarities between the two.

“No doubt, at least for me,” Coleman said. “I know for some guys are a little bit more forceful in their pass rusher moves, but, for example, I’m more of a bender. So when I’m envisioning the curve of a pass rush, it’s the same way I look at the curves and the smoothness of a poem and how it all flows. That’s the same thing in a pass rush; it all has to flow, you have to feel it.”

“My first move that I go to pretty confidently is an out-in-out,” he said. “It’s a way to set blockers up with a quick stutter, but when you make it flow they don’t know where you’re really going.

“Another move that I like is just shooting long arm and then dipping underneath to take off around the edge. … After that, I would say hitting a counter to one of those moves. Switching up the flow or what they’re expecting.”

Football is a barbaric game. It’s violence, speed and strength all rolled into one every second that ball is live. But the best will tell you that, when they need to make their move, the game slows down; it flows, you just feel it.

Coleman does his best work with his hands. Whether that’s poetry or football, the good thing is, both answers are true. 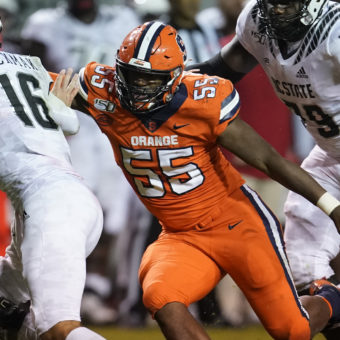